Make Choosing What to Be for Halloween Fun!

This blog shares some of the best Halloween children’s picture books that feature characters searching for a costume. First, we describe picture books for children ages 4-7. We also include descriptions of two board books for younger ages. Find links for more information at the end of the blog.

As you read with children, keep this in mind—Choosing a Halloween costume is a perfect opportunity to stimulate children’s creativity and imagination. It also is an opportunity to explore making decisions that feel good!

What Will Lacey Be for Halloween?

Lacey, a Maltese puppy, has one week to find a costume for her first Halloween party. But she doesn’t know what to be. Lacey seeks the advice of her friends—PeeWee, Sterling, Sadie Sue, Loki, Cooper, and Lola—who strongly urge her to be what they are going to be for Halloween. Lacey tries on the different costumes, but each one is wrong, often for humorous reasons. With time ticking down, her brother Miles encourages her to be something that she loves and to choose a costume that feels right for her. With no time to spare, Lacey comes up with the perfect costume.

Leading up to Halloween, Monster needs a costume. He has many options—a fireman, a ballerina, and cowboy, and a ninja. He likes parts of each, making it hard to decide on one. Just in time for trick-or-treat, Monster decides. He combines one element of each into his final costume.

Birdie loves dressing up for Halloween. One year she was a robot; another year she was a mummy princess. She loves being anything she wants to be. However, this year something special happened. While on a trip to the history museum, Birdie became inspired. She began imagining herself as an astronaut, a physicist, and a Supreme Court justice. But none felt as perfect as being the president of the United States.

Ladybug Girl and the Dress-Up Dilemma

It is Halloween. Every year Lulu dresses up as Lady Bug Girl. But this year, she is not so sure. Her brother thinks she should be something different for a change. Lulu comes up with several ideas—a robot, a silent movie star, a scarecrow, a pumpkin, and a vampire panda. But none of them feel right. In the end, Lulu decides to be true to herself. She dresses as Lady Bug Girl because that’s who she really wanted to be in the first place.

We follow the beloved character as he gets ready for Halloween. Corduroy is having a Halloween party. There are so many things to do—pick pumpkins, clean the yard, decorate, and find party treats. However, his most important task is to find a Halloween costume. This activity turns out to be challenging because he wants his friends to be happy. And, their happiness plays a major part in Corduroy’s search for a costume. In the end, Corduroy decides that friends are more important than costumes. And, as a result of his creativity, he creates the best costume. It results in the best Halloween ever.

Duck and Goose decide that even though it is important to be oneself, Halloween is the day not to be oneself. Goose decides to be a superhero. Duck chooses to be a ghost. But what about Thistle? Thistle says her costume is a secret. They will have to wait until Halloween to find out. In the meantime, Thistle warns them, beware of the swamp monster! And, wouldn’t you know—on Halloween, the swamp monster is looking for Duck and Goose! Can they scare it away?

For younger children who love board books, the Smiles All Around! list includes two that feature characters picking a Halloween costume.

It’s Halloween for little Pookie, who must pick a costume from the costume box. Right away Pookie finds several possibilities. But, when Pookie tries them on, they do not feel good. One is too itchy, one is too hot, and another is too tight. Pookie finds more costumes. But, she does not like being any of them. One is too funny, one is too cute, and another just feels silly. Just in time for trick-or-treat, Pookie finds the perfect costume, one that feels spookie!

Books are available for purchase. Following are links to select distributors. Note: Links were checked upon publication of this blog. Also, as an Amazon Associate I earn from qualifying purchases. 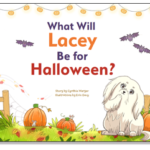 Order: What Will Lacey Be for Halloween? Order the print book now and receive a free Halloween greeting card. At checkout, write the code FREETREAT in the comments box. https://www.smilesallaround.com/will-lacey-halloween/

Follow the adventures of Marigold, Oliver, Miles, Lacey, Tiki, and Tiger as they put smiles into the world.